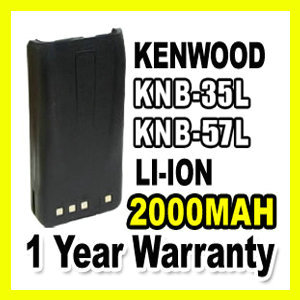 2) NiCad, NiMH and Li-Ion batteries should be recycled. Be environmentally conscious - do NOT throw your old KENWOOD battery in the trash. If you don't know where your local recycling facility is, call the Portable Rechargeable Battery Association at 1-800-822-8837. They will provide you with the address of the recycling center nearest to you.

Charge your new battery overnight before using it. This is referred to as "initializing" and will enable you to obtain maximum battery capacity.
Nickel Cadmium or Nickel Metal Hydride: Charge 14-16 hours
Lithium-ion/Polymer: Charge 1-2 more hours after the charger light turns green.
New Motorola IMPRES batteries, when inserted into a Motorola IMPRES charger, will indicate a calibration cycle by displaying a steady yellow light on the charge status indicator. Allow this calibration process to complete by not removing the battery from the charger until it's fully charged and displays a steady green light.
In order to minimize capacity loss and cycle life reduction, new, non-initialized batteries must be stored in well ventilated, cool and dry locations. Batteries stored in these conditions may be stored:

If used batteries are to be removed from service for extended periods (greater than 30 days) they should be discharged to about 50% of their capacity. Store in a cool, dry, location.
Charge a new battery after it is fully discharged (Lithium Ion batteries can be recharged at any time).
DO NOT use the battery charger as a radio stand; continuous charging will shorten the battery life.
Keep spare batteries for swapping out when your battery needs to be recharged. This is the most cost effective solution for users requiring longer operating time.

Batteries that are in storage for more than two months need to be recharged:
Nickel Cadmium or Nickel Metal Hydrive: Charge 14-16 hours
Lithium-ion/Polymer: Charge 1-2 more hours after the charger light turns green.
When ordering new batteries, specify Genuine Motorola brand; they are precisely engineered for use in Motorola two-way radios.
When using a Motorola rapid charger, leave the battery in the charger for an additional 1-2 hours after the steady green light appears. Applies to non-IMPRES batteries only.br> Only charge a battery when it needs it. If it is not fully discharged, do not recharge it.
Do not return fully charged non-IMPRES batteries to the charger for an 'extra boost.' This action will significantly reduce cycle life.
With proper care, batteries should last about a year and a half.

Two-way radio batteries are central to the proper functioning of your radios. Many radio users are unaware that their radio batteries are close to expiring or loosing power. A lifeless battery can cause many radio failures and warning signs are a first clue to a potential problem (see battery care on the advice page). For many operations radios are used on multiple shifts and are not cared for or inspected on a regular basis. Good quality Motorola radios are meant to last even in the most harsh environments, however, your radio is only as good as the battery inside.br> Our new FREE Battery Analysis service is designed to get a current reading of your battery status. The new system is called the Battery Optimizing System. This system provides fast, effective and accurate readings of the battery health and can accommodate most any battery.br>